A sewing cabinet is a small, convenient, sometimes spindly legged and wheel-footed, hollow work table. The point of the sewing cabinet, and therefore the focal point of the design, is the open space within, meant for storing and concealing lady-like pursuits (I’ll let you decide what those might be). They apparently developed in England in the 1770s, but I have yet to find a source for that, especially a reason for why they weren’t in use earlier. I’ll have to get back to you on that.

They definitely at some point developed from a “workbag,” a similar sewing implement intended to keep everything in one place. The cabinet just took the bag and held it up for you. They had all kinds of pull-outs and drop-downs, and even sometimes the flat surface was also designed as a writing desk. When the sewing machine was invented in 1790, the sewing cabinet gave way to the sewing table, with attached machine.

The one I have is probably from the 1950s or 60s. It’s one of those family heirlooms that no one seems to recognise or remember, and it was desperately in need of help. I actually spent a long time debating if it was even salvageable. I don’t have a real “before” picture, so you’ll have to trust me, but this thing was really sad. 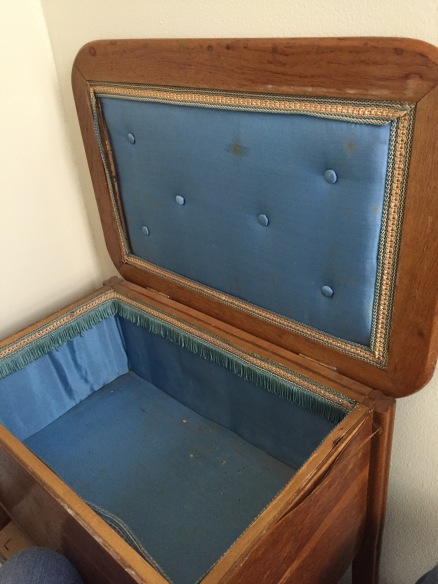 The first problem was the dirt. It had been sitting in our garage in Florida for at least a decade. I took it outside and wiped it down with mineral spirits, because there was no way I was going near it until the dust was gone. 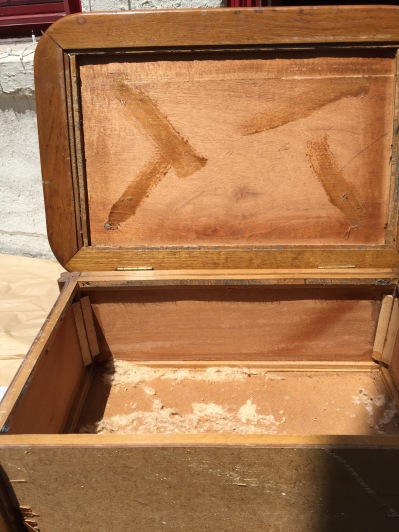 Then I removed everything that could be removed. The inner lining was held in place by glue and tiny nails, but it came off pretty easily. The veneer I could pull off without tools, except where it was stuck in the corners. I unscrewed the hinges on the lid for easy access.

The next step was to sand the real wood. It had originally been finished with polyurethane, which was badly yellowed. This step probably took three days. I couldn’t sand the wood enough to totally remove the finish, but I got it to the point where it isn’t visible unless you know where to look.

The last step for the wood was to finish with Tung Oil. I like using Tung Oil because I think it makes a lovely sheen, and it’s more forgiving than other finishes.

To paint: I painted over anywhere I’d removed veneer. The color is Annie Sloan‘s Antibes Green Chalk Paint. Antibes Green is usually a stronger yellow-green than it looks on my cabinet, but I was particularly pleased with the result. I finished the paint with Annie Sloan’s Clear Wax.

The final touch was the inner compartment, lined with yellow probably-polyester from the extra bits bin at the fabric store. The fabric was wrapped around carefully measured cardboard and then wedged into place. The top was glued, but it too is wedged in tight.

My biggest problem with this piece is that I find the design of the compartment really annoying – you have to move everything on top of the cabinet in order to get to the contents. I do sew, but it’s just too frustrating to use all the time for that purpose. Instead, I keep some books in there, the rare and old ones that shouldn’t get too much sunlight or use. 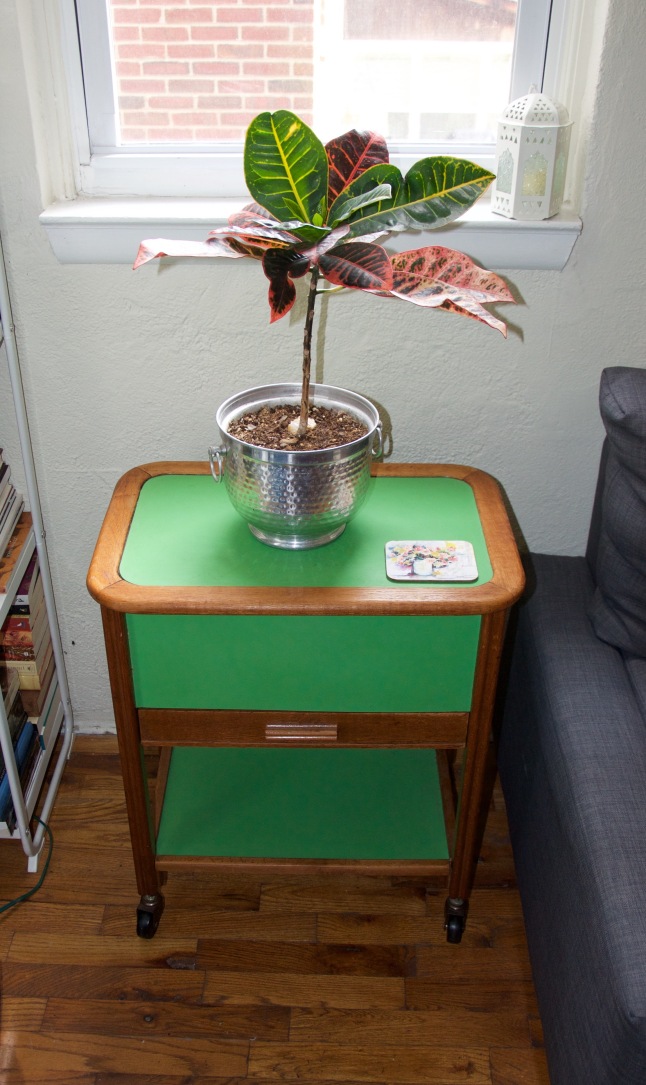 And that’s the final piece! Of all the furniture I’ve worked on, this is probably my favorite. I’m so happy with the color of the paint and the way the wood glows. The plant was a gift from friends, and I think it looks fantastic!