At the end of last year’s move, I had 17 boxes (the regular moving kind) full of books. That’s not counting the slightly larger box of children’s books that was going into storage (I am occasionally seized by the desire to take another look at the first love of my life, Carl).

Then I (we) moved into a one bedroom apartment, which is really more of a loft, and suddenly 17 boxes of books were not just a luxury, but a hazard. The featured image is what all of my shelves look like. Shift one book and they’re all coming down.

I’m not saying this to brag about how many books I have, which is obnoxious, although I am proud of my collection. I’m saying it because the honest truth is that I haven’t read most of those books. I don’t even read that often, despite how much I write about it.

When I was a child, reading meant something very special to me, and even today I don’t really understand it. I read, as my father once succinctly put it, like I was “self-medicating.” I don’t want anyone to read that as an insult – it’s simply accurate. It was like an addiction. It was painful to put a book down, to be forced to engage with the real world.

Again, I don’t know why. I have theories. Part of it was certainly escapism. Part of it was probably boredom. Part of it was a search for answers to certain questions: about proper behaviour and self-worth, about heroism and dignity in the face of villains like vampires and teachers.

I don’t read as much as I used to. It’s for the best. I have to write blog posts about books – I don’t have time for reading. I have to go to the grocery store. I have friends.

The other reason is that my early reading habits have severely impacted the way I read, because I still have a very hard time stopping, unless I’ve reached the end of the book. I tend to read in seven to eight hour chunks. It’s not healthy, and it’s a huge pain in the ass.

Despite all of these things, all of my early-childhood trauma and bad habits, I still love reading, and I want to do more of it. So here’s a look at the list of books (mostly upcoming or just published) that I’m so excited about I’ll break those bad habits for them. 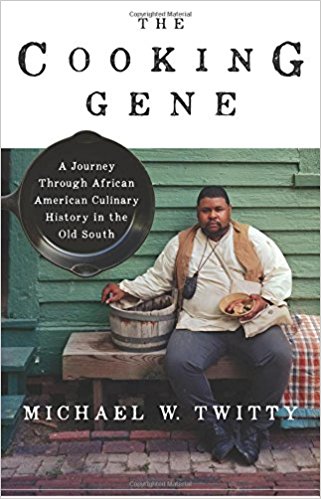 The first, which comes out August 1st, 2017, so the day before this post goes up, is The Cooking Gene: A Journey through African-American Culinary History in the Old South, by Michael W. Twitty. I discovered Mr. Twitty recently because I’ve been doing lots of research for an upcoming food history project. He’s a culinary historian and historical interpreter (those are the people that work at historical sites and wear appropriate attire, mannerisms, etc, for the purpose of educating the public). The book is about his personal journey to trace his ancestors through the culinary traditions of the American South – he describes it as a “genealogical detective story, a culinary treasure map, a blueprint for finding your roots, a series of history lessons, a revealing memoir and a spiritual confessional sprinkled with recipes.” I mean … that really speaks for itself.

The next book on my to-read list has actually been out since May (oops). Thick as Thieves is the latest by Megan Whalen Turner, the fifth in the Queen’s Thief series. I’m not suggesting that you read the fifth book in a series first. I am suggesting you read the series, though. It begins with The Thief, which is a heist/political intrigue characterised by the narration of the main character, “Gen,” who can only be described as a little shit with a lot of courage. I don’t want to give away too much (there’s a beautiful plot twist at the end of the first book), so I’ll leave you this: when we first meet Gen, he’s in prison (shackled wrists, ankles, and waist) for having wagered in a wineshop that he could steal the king’s seal, and then presenting said seal in the shop the next day.

The next two (technically four) books are so far off that it might seem ridiculous to be talking about them now, but I’m going to do it anyway. The first of the 2018 group is Tempests and Slaughter, the next in Tamora Pierce’s Tortall universe. I talked a little bit about her Protector of the Small quartet in the Harry Potter post a few weeks ago. She probably had as big an impact on my childhood as JK Rowling did – if not more, because Tammy’s written something like 32 books. Tempests and Slaughter is a throw-back: it’s a prequel to The Immortals quartet, based on Numair Salmalin’s younger years learning magic in Carthak. The fact that there’s a dripping feather on the cover is hilarious considering that an account of Numair’s early years is also an account of Ozorne’s early years, Ozorne being the infamous (and titular) Emperor Mage of the third Immortals book, who had a nasty run-in with a metal feather at one point in the story. 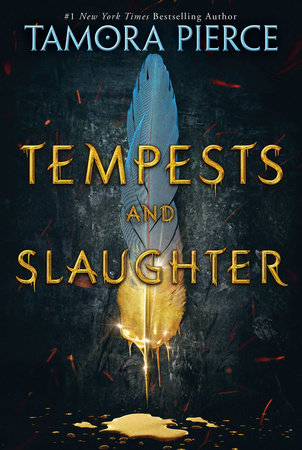 If you’ve never read Tammy Pierce and you’d like to start, she has two universes: the Circle universe, which is about four orphaned kids learning they have craft magic, like with sewing and smithing (it’s amazing, read it!), and the Tortall universe, which is a more traditional high middle ages analogue with kings and knights and talking animals. Theoretically you can start reading anywhere in Tortall (I started halfway through the fourth book of the Immortals for some reason), but it technically begins with Alanna: The First Adventure (an apt name) which is about a girl who pretends to be a boy in order to become a knight.

The second book coming out in 2018 that I’m really excited for is Aru Shah and the End of Time by Roshani Chokshi, which is the first to come out of Rick Riordan’s new imprint with Disney. Rick Riordan, if you’re not familiar, is the author of the Percy Jackson series, which at this point probably spans several universes. People have been asking him for more and wider-ranging mythology-based books for years, and this imprint is his answer. Instead of writing about, say, Hindu mythology as a white man, he’s supporting other authors in writing about their own heritage. Roshani Chokshi is a best-selling author in her own right (The Star Touched Queen), and she’s not the only one. The other two authors with books coming out through the imprint in fall 2018 are Jennifer Cervantes (Storm Runner) and Yoon Ha Lee (Dragon Pearl). Yoon Ha Lee just made huge waves with his debut novel Ninefox Gambit.

Let’s get back to things that you don’t have to wait for. I’m currently reading a wonderful book called Consider the Fork: A History of How We Cook and Eat, by Bee Wilson. It’s a look at the technologies and environments that have shaped what and how we eat throughout history, from the earliest of cooked foods to Victorian ideas about vegetables (why WHY would you boil carrots for forty-five minutes? You’ll have to read the book to find out). (Okay, actually, it has to do with pot size and water temperature – it’s kind of a boring explanation.) (Still a really good book.)

Now, granted I’ve really only described two kinds of books here: young adult fantasy and food history. I’d apologise and say I’ll work a little harder to broaden my horizons, but then again, why should I? Let’s double down, my nerds: The Adventure Zone, a podcast where three brothers and their dad play Dungeons and Dragons, is becoming a graphic novel (July 18, 2018), but if you can’t wait that long, you can listen to all the episodes via the first link. TAZ is both charmingly rude and truly heartwarming, but that’s only part of its charm, so go ahead and let the McElroy family take you on a journey with lots of robot arms, lunar headquarters, seductive vines and bad jokes. What’s the worst that can happen?

I’m going to be in Montana for a week in the middle of August, so I’ll be taking a good stack of books out there, where the only people my reading habits will disturb are family members who are used to them. On that note, this is a good opportunity for me to mention that there may be some wifi access problems while I’m there. Hopefully the post that week will go up smoothly without me, but if it doesn’t, apologies in advance.

I really like this idea of a book list, and I might keep doing it in the future. I promise I do actually like other kinds of books! Food history has really been on my mind lately, and I can’t wait to tell you why!